In order for communication to occur on a network  all parties must use a common language. In IT networks this is known as a protocol.  There are many different protocols available for computer networks. The most common and widely used being TCP/IP.

TCP/IP is the standard protocol that is used on the internet. In order for any network to access the internet you must use the TCP/IP protocol suite. TCP/IP is required by Active Directory. For this reason, TCP/IP is the default protocol for Windows XP and 2003.

Reference is often made to the TCP/IP stack. This consists of layers of mini applications which perform the discrete job of  sorting and filtering the data packets picked up by the NIC and then passing the packet on to the next layer for further processing. Eventually a coherent message pops out of the top of the stack into the operating system for the user to read. The reverse is also true i.e. converting of the reply into data packets that can be sent over the network media.

The layers in a TCP/IP stack write headers for network messages as well as decoding them.  Each level in the stack adds a portion to the network packet which its counterpart in the receiving computer will understand.  Strictly speaking, the NIC isn’t part of TCP/IP, but protocols are bound to a particular adapter.

At the receiving computer, the headers are stripped off as they pass up through the  TCP/IP stack until only the bare payload is presented to the user. 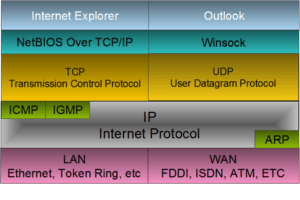 TCP/IP is often referred to as the TCP/IP protocol suite. TCP/IP is in fact a group of protocols/applications working together to provide network communication. TCP/IP was invented by the US Department of Defence (DOD) to allow machines to communicate over a network. It is a simpler model than the 7 layer OSI model.  The different components of TCP/IP all function at different layers. These layers group the different components into four different categories.

The Transport Layer is responsible for the transfer of data on the network.  There are two different transport protocols TCP and UDP. Both protocols provide transport but work in different ways.

TCP is a connection-orientated protocol. Both sides confirm that the data is being sent and received.

UDP is a connectionless-orientated Protocol. Both computers presume the other side has received the data.  As an example, name resolution uses UDP. If the query fails then a TCP name query is made.

To send data the sender must have a method of distinguishing the recipient. This is called an IP address and they take the form of a unique number on the network . The Internet Protocol is responsible for these addresses.  The Internet Control Messaging Protocol (ICMP) is used to test connectivity between machines by sending ICMP messages using the PING command.  The Internet Group Messaging Protocol (IGMP) is used to send data to groups of machines, e.g. Streaming Video. This is known as Multicast.  The Address Resolution Protocol (ARP) is responsible for changing an IP address into the network card’s physical address. Every network card has a unique physical address hardwired into the card itself which is needed for communication on a network.

The Physical Layer is responsible for the actual physical media and how the data is sent to another machine, e.g. Fibre Optic, ATM.  There are many ways to send data down the cable, the most common technologies for LANs are Token Ring and Ethernet. In order for two machines to communicate they must be using the same technology or be connected via a bridge .