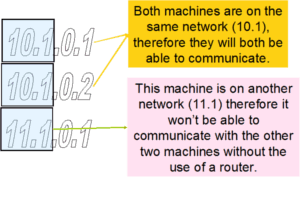 A machine can identify which part of its IP address is the host ID and which part is the network ID by using a set of numbers called a subnet mask.

The subnet mask divides the IP address into two parts by using on (1) and off (0) switches. 1 represents a network ID and 0 represents a host ID.

A subnet mask doesn’t have to be a full octet. It is possible to use a subnet mask that is only a partial octet.

For example 255.255.240.0: This enables the administrator to create custom subnets to divide a private network into several discrete sub- networks

When TCP/IP first appeared, IP addresses were placed into different classes A,B,C and D. The subnet mask of the machine would be determined by its IP address class.  To determine what class an IP address is , refer to the first octet of the address, e.g. 100 for 100.23.23.1

Of the 32 bits available, the bits required for the network ID can’t be used. In a class B network for example this takes away 16 bits, leaving 16 bits for the host addresses. This can be used to make numbers up to 65536 (2 to the power 16). Host addresses using all 1’s or all 0’s are reserved for special use, hence the figure in the above table of 65534.

Although these days you can have any subnet mask, classes are still used when a subnet mask isn’t given. There are  a number of private address ranges available for use in internal networks. These addresses will never be seen on the internet. As internet routers will not pass packets that originate from these addresses.

Imagine a scenario where you have been assigned the address range 193.28.34.0 for your company’s network. You need to have 14 separate networks each with ten computers in.

Considering that you only need 10 hosts and not 254 we can take some of the host ID’s and turn them into Network ID’s. You can do that by creating a custom subnet mask…

With the help of a router computers on both networks would be able to communicate. The router is physically connected to both networks and has two IP addresses.

When a client wants to send a packet out on the network it checks the network ID of the destination machine. If it is different from its own it would send the packet to its default gateway.

Routers can communicate with other routers so that network packets can be passed to their correct destinations.

A network packet travelling out on the internet may pass through several routers before reaching its target. Each router forwards the packet on to the next router until it either reaches or fails to reach its destination.

Routing is covered in much greater detail later on in this course.