In the basic installation, Math outputs variables in italics. If we enter a function, Math usually recognizes it and outputs it normally. If Math fails to recognize a function, we can inform Math about it by entering the markup code ‘func’ before the function. By using this code, the text following the code will be recognized as a function. Some functions recognized by Math need to be followed by numbers or variables. If these are missing, Math puts an inverted red question mark ‘¿’ in their place, which we can only remove by correcting the formula: enter a variable or a number, or a pair of empty braces ‘{ }’ as a placeholder.

An example has been shown below. The factorial function ‘fact’, when written without a variable throws an error.

But when the variable is provided, the error gets removed by itself.

Equations over more than one line.

Suppose we need to make an equation covering more than one line, the simplest and the most conventional method we can think of is to simply press the ‘Enter’ key from the keyboard. However, if we press the ‘Enter’ key, although the markup goes to a new line, the resulting equation does not. We need to use the ‘newline’ command explicitly. This has been illustrated below. 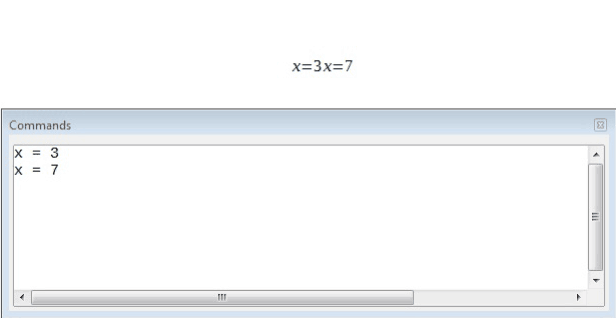 If it is required to continue the calculation on a new line without writing a complete new equation, this is not directly possible, because Math expects a term on the left hand side of an equals sign. We can substitute empty braces ‘{ }’ on the left hand side to achieve this. This has been shown in the below given illustration.

Here the inverted ‘?’ appears because there is no tern on the left hand side of ‘=’.

Here the equation shifts to the next line as empty braces have been used.

Also, spacing between elements in formulas is not set by space characters in the code. We need to use special markup to add spaces: ` (grave) for a small space, ~ for a large space. Another solution would be to add space characters between quotes, to be considered as text.